Attention, it has come to my awareness that I am mostly wrong about this post. The 32 and 64GB version of the iTouch are not so weak, they are only lacking the camera. Instead of dwelling on these facts, which would only distract from a good conspiracy theory, I urge you instead to enjoy instead this excellent picture of two wolves eating each other’s head: 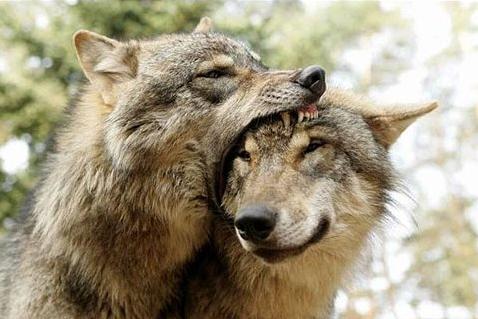 Anyone else surprised and a little underwhelmed by the apple “It’s just rock and roll but we like it” event today? For a music update, the nano got a vaguely bizarre video camera update as apple’s answer to the flip video. An answer to a question to a question I’m not sure who was asking.

While the most obvious device strongly rumored, and begging for a camera the iPod touch got nothing. Nothing except some minor and overdue price and capacity adjustments catching up to the continuing fall in flash memory prices.

No camera for the iPod Touch and, more significantly, no 2x the speed upgrade either like the iPhone received earlier this year. Instead the iPod continues to labour with a cpu architecture now three years old. Less than ideal for a supposed gaming platform and supposed wunderkind pocket web computer.

And as for any kind of augmented reality applications or fun games incorporating realtime video or picture taking, you can forget about those too.

Why would apple miss this boat?

Well my guess is that it’s not intentional. Look no further than the huge backlog on iPhone3GS deliver. As an anecdote, my girlfriend Michele ordered hers online back in July and it has yet to show up. Sounds to me like apple is continuing to suffer some serious manufacturing or chip-yield issues, my guess with the cpu or one of the other key logicboard chips like the graphics chip that both the 3GS and any would-be 3-series iPod would be built off of.

It’s not uncommon for a new chip or a chip built on a new silicon process to have yield (number of working chips per wafer) or binsplits (number of usable chips that will run at the desired speed/power requirements). And the new ARM 11 cpu and the new GPU are both new chips AND being fabbed on a new smaller silicon process.

It’s hard to believe that apple would have intentionally let the 3GS shortages carry on this long and it looks like an upgraded iPod touch is a casualty of Apples struggles to ship enough iphones.

UPDATE: correction – the two more expensive versions of the iTouch do have the new processor. perhaps the problem could be related to rumored issues with the camera module itself?