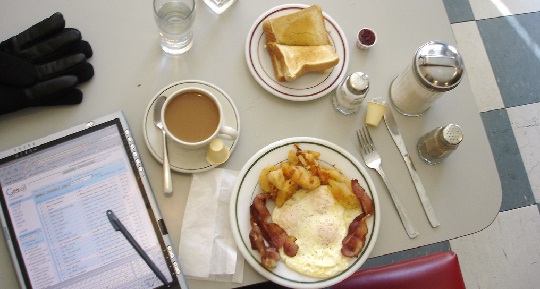 A friend at lunch the other day showing off his iPad 3G brought back this wave of tender nostalgia.

For three years I too carried a tablet around. It was the tablet that time forgot (no not the newton), the original Microsoft full slate tablet PC. That’s me chewing on a tablet pc stylus in my longtime blog/twitter avatar.

The tablet was the ideal restaurant, couch or streetcar or meeting pc. Meetings or lectures with the tablet were a special case. Having a screen on your knee or flat on a table is a much less obtrusive way to have a screen open when someone is talking. Tablets reduce the social and physical investment required to use a computer, leading you to use a computer in more contexts, more of the time. 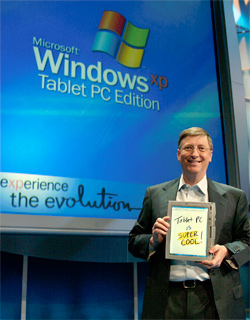 Despite hardware in some ways more advanced, there are some ways the old tablet didn’t come close to measuring up to the new iPad, the size and weight (3lbs, just a bit too heavy for comfort), the screen (same resolution but terrible contrast and viewing angles) and price. At the insane cost of ~$3000 it’s no wonder they didn’t sell like hotcakes. And, well, the app ecosystem.

You would have thought being able to run any windows app ever written would have been a good start. But the problem with MS Tablets was that they tried too hard to be seamless with desktop Windows without letting the tablet just try to it’s own, new thing. And that’s where the iPad really seems to shine in ways that Windows Tablet PC Edition never could be back in 2003. The iPad is a single purpose device. The iPad only tries to be what it is, a connected screen, a window on the cloud and a constellation of apps purpose-built for the form factor.

That’s not to say the MSTablet didn’t have some killer apps. Mostly thanks to it’s stylus (multitouch nearly 5 more years away). Photoshop and paint tools were unexpectedly a disaster. The poor screen quality made colors hard to judge while the slight parallax error of the stylus made sketching worse than it should have been. What did work amazingly well were mouse-intensive apps like powerpoint and excel. Without having to constantly switch from mouse to keyboard, laying out decks and whipping out excel models was a dream on a tablet. Try that on an iPad.

Microsoft Word, worked okay on a tablet but only in combination with voice recognition (the pen also making quick point and click corrections easy). For me this was important as I was getting over a nasty bout of RSI at the time. But as my arms improved, I found myself needing a “real” computer to get any real writing done.

The main risk I see of the iPad is the same problem I have with an iPhone vs a Blackberry. The screen-only-not-so-good-for-typing form factor risks turning us all in to predominantly consumers rather than creators of media. It’s no coincidence that soon after I started this blog, and a new business, that I inevitably ended my long experiment with tablets.

Inevitably, Michele and I will have to pick up an iPad. The question is whether we can hold out for the inevitably much improved v2 version next year. We’ll see how that goes.

You know, I do still have that old tablet pc kicking around someplace. It even sort of still boots up. Anyone out there wanna trade?