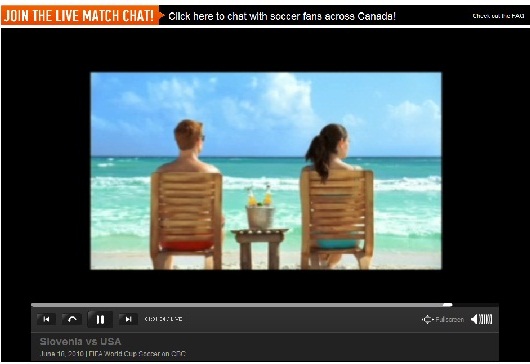 Let me say this. I love being able to stream big events like the Olympics, the America’s cup or the world cup over the internet in HD. As someone who has dumped subscription cable years ago it is a godsend. Occasional glitches/hiccups notwithstanding, HD streaming is fantastic. And it feels like the future.

But omg the ads. This world cup is better than the olympics as the CBC has been at least reluctant to air ads while the match is in play. And inevitably, the same ads over and over again. Considering what possibly could they be earning in CPM of me. I am pretty sure that I’d be willing to pay 2 to 10 times that amount for the convenience of whatching the whole games or whole worldcup ad-free. And I think that amount would still be cheap.

Ads are an increasingly tough way to make money online. If they are going to survive, the broadcasters and content producers need to get on the ball of monetizing their viewers directly. Especially in cases where those viewers are literally brandishing their credit cards at the screen lamenting why won’t you bastards take my money?