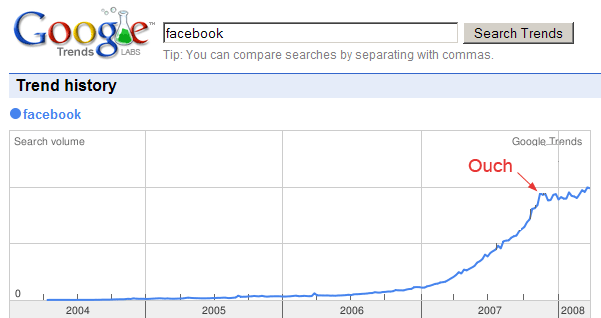 Sometime in November 2007, facebook hit a wall. We know that traffic to the site took a dip in dec/jan as students delved into exams and headed home for Christmas break. But why aren’t they coming back? Searches for facebook have flatlined (note that many users use the google box like an address box).

Could facebook have done a better job of introducing apps and social adds with without flatlining what had been a lovely and long-running exponential growth curve? If so/not Did they pick the right point to cash in on their established audience?

Look at the last quarter of growth rather than the previous 3 years. That audience is worth something. But is that growth curve still worth 15 billion?

A warning signal for social network builders and would-be “lets get an audience first and worry about the revenue model later”. Does your grand monetization strategy fundamentally change the value proposition, feeling and experience that you built your audience on in the first place?

File under I Can’t Has Cake and Monetize it Too