Earlier this week Microsoft Canada invited myself and a few other locals out to take a look at Bing. Here’s what you should know about Bing.

Another thing to know. Bing in Canada isn’t the same thing as Bing in the US. The US one has a lot more “stuff” to it. You may or may not actually like the cleaner Canadian version. Click to make these pictures bigger:

I’ve been trying out for a several days. The best you can say for it is that it’s okay. It’s a fine search engine. This may not sound like high praise, but a) it’s far better than you can say for the last few search engines who’ve tried to take on the GOOG b) coming from microsoft, who are only finally starting to rediscover the internet in recent years.

And Microsoft really is trying to take on the google, or so they say. Actually how they say it is that users are unsatisfied with “search” and that they use the back button too much and that “search” takes them too long to find a perfect pair of shoes for example. But they say they are not trying to take on Google per say. As though taking of “search” is somehow a different than taking on the company that has 97% market share of search.

How do you get better than Google? Well this is tough, google being, let’s be honest, much of the time, almost brilliantly indistinguishable from magic. Then there is Google Inc.’s habit of generally simply awesome web applications all over the internet and then giving them to us users for free. Don’t you feel kinda bad not using google for search?

To do better, Bing’s strategy is mostly about trying to aggregate a lot of corner cases. Bing’s search results provides categories that are context sensitive to what you are searching for. Search for “Toronto” and you’ll get a lot of results categorized by city-ish and touristy-ish related subjects, search for “Australian Cattle Dog” and you’ll get dog pictures and categories like adoption and pets and rescues. Not bad.

Is Bing a serviceable replacement for googling? I would dare say that most of the time it is. Is there any reason you should switch? Well let’s not get crazy. Bing is by no means clearly better than google, it may be fine, but it’s not clearly ten times better. Ten times better is probably what it would take for most consumers to consciously and confidently make that decision.

And that’s what’s really so funny about Bing being better than google, is how much Bing looks like google. Though it’s front page is rather distinctive, Bing’s results, how to put this politely, “leverage a lot of familiar affordances” from google:

I Can’t Believe it’s not Google!

You know I bet if bet if you shipped a lot of OEM computers that just happened to have Bing set as the default search engine, that it might take a lot of ordinary users a while before they even noticed that they weren’t on google…

UPDATE/PROTIP: the image searching on Bing is actually pretty awesome. They give you a nice side bar frame to browse across images on multiple sites, much less back-buttony than google. Example. Click on a picture in these results to see what I mean. 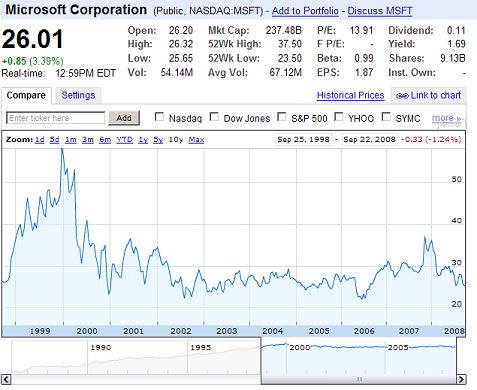 Microsoft gave us tech bloggers a sneak peak at their new IE8 web browser the other day.

On the whole I like it. In several areas, IE8 catches up in features to other modern browsers. In other areas, it introduce a few new tricks other browsers could learn from.

IE8 does still retain the bizarre menu button placement introduced by IE7, as well as the generally Vista-ish (read tacky) look and feel of the chrome. This is probably enough to keep me personally from using it. What can you do. The important thing, the really important thing, however, is that a lot of other people start using it.

As far as functionality IE8 is one big step forward for Microsoft. And IE8 should be a good thing for the web. Some people will complain that the browser does introduce a number of new proprietary/non-standard features but you don’t have to use them. On the contrary, IE8 looks to be much more compatible where it counts as far as CSS and fundamental webstandards compatibility.

Modern versions of firefox, safari, opera are really great browsers and have been for years. If you’ve got one of these you are doing just fine. Nonetheless, stubbornly millions of people and far too many IT departments are still stuck way back on IE6. The F&*#&ckers. This is a problem. Maybe a problem only Microsoft can fix.

So it’s great news than, for the first time in many years, MS will have a browser worth using. How they plan to convert all those old IE6 & 7 users I don’t know (the process hasn’t gone so well for Vista you know). But if it can be done, if IE8, Firefox, and Safari can become the new baseline for the desktop web, than we could really get back to building some wonderful things. And web designers everywhere would just have to find something else to spend their time swearing about.

You can play with IE8 beta2 yourself if you like.