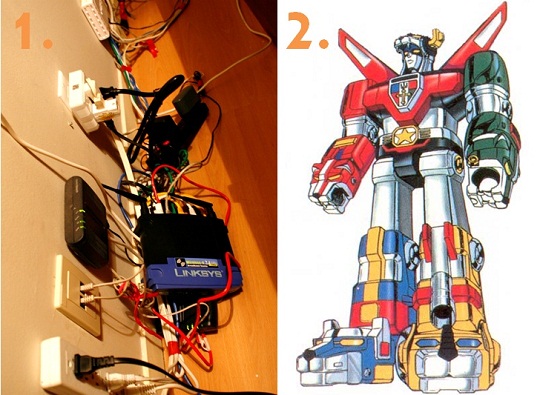 It really only did take about nine minutes to actually set up. Two DSL lines, one internet connection. Not counting a few later hours of mild swearing and voodoo rituals to get it to work right on all the computers in the house. And not counting the few days it took for the Bell tech to setup the extra line, and the indefinite project to figure out how to tidy up all those boxes and wires. But it works! and it’s not that hard.

The goal was this, how to turn two regular off-brand 5MBit down/0.8MBit up DSL connections into one single 10/1.6MB super-pipe using a trick called multi-linkPPP (MLPPP).

There are a few side-effects of using MLPPP, the one being that Bell (who provides the last mile for all indie-ISPs) cannot, for some obscure technical reason, throttle, inspect, cap, “traffic shape” or otherwise abuse packets sent over MLPPP.

Monthly bandwidth caps are another tool the major ISP’s use to manage the dangerous risk of competition with their other digital services or lines of business. With dual Teksavvy connections I’ve discovered I now have silly-high (400GB) monthly bandwith cap. Not sure even what to do with that, but maybe I’ll think of something entertaining.

One last relevant side effect to mention is that with this setup your monthly bill gets doubled too. Combined with the requirement for two phone lines, two DSL lines and a customized router, you might think hey, that’s a pretty crazy way to try and keep up with Moore’s law. You’d right. By some accounts, Teksavvy is the only “major” ISP on the planet to offer MLPPP. It’s also a sad story to go through such trouble for a 10MB connection when Bell/Rogers are technically capable of easily providing a much faster connection through a single account. And lets ignore that 10MB is only 10% of the speed of the every day and generally dirt-cheap broadband you’d find places like Sweden, Japan or Korea.

The jury is very much out on whether, for practical purposes, a 10Mbit Voltron connection from Teksavvy is really better than a 16 or 20 MBit “ultra” offering from Bell or Rogers. It’s certainly no cheaper (each Teksavvy line is about $37/month). But pay no attention to creeping thoughts of rationality, the important thing is, it’s twice as fast as what you had before!

Besides, if you want the fastest pipe you can get from a friendly indie ISP, whether for practical or philosophical reasons, you just have to buy more than one. Crude and amazingly inefficient as that may be. But also kinda fun.

Because it’s hard to find elsewhere on the web, here are all the step-by-step instructions.

1. Call Teksavvy, tell them you want to order not one but two DSL lines and ask them to enable something called “MLPPP” on one of the lines. They will know what you are talking about. It doesn’t matter which line has MLPPP enabled, but it will charge you an extra $4/month on that line.

2. While waiting for your DSL to be set up, head to the store to pick worlds most hackable router, the venerable Linksys WRT54GL. You will have to flash the router’s bios. For those unfamiliar, this is a lot easier than it sounds, it is literally a one click procedure to effectively replace the routers operating system with this much better one that also supports MLPPP. If only upgrading the OS on regular computers were so easy. Or if this still terrifies you, you can buy a pre-configured WRT54GL straight from Teksavvy.

3. When the Bell tech comes to your house to provision your DSL, beg, bribe or if necessary pay ($100 is the official rate) the tech to replace one of your regular jacks with a two-line phone jack, if you don’t have such a thing already (and so you can plug in your two DSL routers conveniently side by side). Or if you are particularly handy, do the wiring yourself in advance.

4. Watch guspaz’s awesome youtube video on how to setup up bonded multilink (MLPP) DSL connection in 9 minutes or less:

5. If anything doesn’t work straight away, I can recommend gradual elevating levels of swearing and pejorative gesticulations. Of course while doing this, you might also quietly double-check that all the cables are actually plugged in, and securely plugged in, to where you think are plugged in. (a combination of these two approaches seemed to work for me)

Another ISP Acanac claims to be supporting MLPPP soon. If that qualified for their excellent $18/mo for 1 year plan, that would make dual connections pretty affordable.

Here is another asus router they say works if you want to try it.