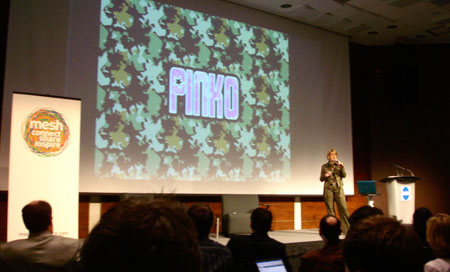 Say what you will of the outcomes of various communist revolutions, at least they had great marketing.

In some distant past lives as a designer, I’ll admit too that I have been drawn to these same motifs as well, the bold lines, sharp colors and explosive iconography can make for some remarkable graphic design. And maybe with the right historical sensitivity and/or a firm grip on the ironyometer, you can pull this off. But I don’t think you can pull it off whilst earnestly [gasp] citing Marx at length, as Tara Hunt (Miss rogue) does in her first post for Pinko marketing. That reference was since (sortof) retracted, but the imagery remains. Sure, she looked kinda sharp up there, but simultaneously there were a lot of us bums squirming slightly awkwardly in our seats.

And here is the real irony. Truth be told, social media != communism as it has ever been practiced. Social media is all about subverting and breaking down inefficiencies where they occur in centralized, top-down organization. And yet we all know how communism turned out. If anything, the unfettered empowerment individual voice, the ability of the community (read: market) to organically and meritocratically select for the best ideas and have them win out in the end – starts to sound a lot like, er, serious right-wing stuff. Libertarian Marketing anyone?

As the dust settles, what’s been the reaction to Tara’s Mesh performance throughout the local blogodome?

Joey explodes. Calling Pinko a cool idea with a bad name he starts off, rather entertainly, by relating Pinko to an axis of evil (and not the one you’re thinking of). I couldn’t agree more. It was Joey’s post that inspired this one, and look, we almost have the same picture.

Jevon yawns. If we can distil Pinko to saying it’s all about using social media to enhance communication building trust, credibility and wisdom within the crowd; then my friend Jevon has been ahead of that curve for a long time.

Others loved Tara’s keynote. See, for instance the comments here on this blogpost. Calling her “the diva of web2.0”. Now there’s a moniker.

No one I’ve seen so far is criticizing Tara’s actual ideas (she’s built her theory on sound foundations after all) aside from the quibble that she tends towards a slightly false absolutism. Clearly, though it is a good one, marketing is not the only application for social technology, nor is social marketing the only answer for selling goods in the future. etc.

Now Tara herself is a charming woman should you have the chance to meet her. So through the trials of self-inflicted controversy, does Tara Hunt deserve our well considered sympathy or antipathy?

Well consider this: By adopting such divisive and discomfiting branding (and it’s all a meta-controversy no less with almost no connection to the validity of the underlying ideas) Tara is generating a high level of attention on her, her ideas and somewhere down the line her employer Riya. Now how is that for a cunning marketing plan?