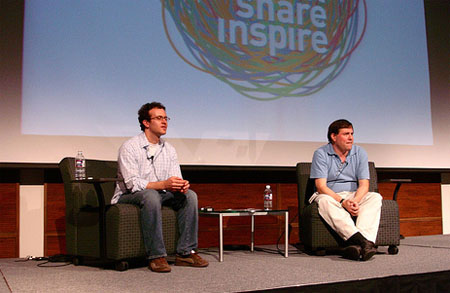 So Rick Segal stood up at Mesh today, went on the record to say he is ready and willing to sponsor a “businesscamp” if someone will organize the thing. He’ll bring his VC colleagues, lawyers and seed capital, for an event of some kind, for a week say, if we’ll bring entrepreneurs willing learn and willing pitch their ideas. This offer had me sitting suddenly upright in my seat.

For some time I’ve been messing with the ideas around organizing a next generation slamcamp, one that’s extended in format and one that gets down to building on some ideas or even seed funds them. (see 8 Ideas for the future of Barcamp). Guinine VC participation could be just the catalyst to get this idea off the ground. Or so I was thinking.

But David Crow (btw congrats on your “new job” I think with innovation commons and 3rd spaces you’ll be enabling amazing things but i digress) Boris Mann were less sanguine. “ya of course he’d say that, but why do we need VC?” Boris wen’t further “this session should have been called “Do the VC need Web 2.0 Companies?” not the other way around.

They have a point. As Bob Young [redhat, lulu founder] would say “is hard enough to start a company without having to drag a VC along with you”. And the economics have changed. If you collaborate with the community, if you leverage open source ideas, if you market is connected and if you use zero-dollar marketing you can now create remarkable organization/company/software with what would it seemed just a few years ago like absurdly low capital requirements. cool. who needs greedy vc?

It is a wonderful thing that you can launch certain sorts of enterprise now with only (say) 500k or 50k… or 5k.

37 signals was a great, and discussed, example of a successful “web2.0” company bootstraped without any need for VC. barcamp itself is a great example of a phenomenal, global-scale organization operating with essentially no budget whatsoever.

It’s this combination of community and technology that has enabled a fast-growing set of opportunities with low, ever-lower capital requirements. and this is what everybody is talking about (and don’t get me wrong, legitimately so)

But this is not the only set of possible opportunities.

Will you tell me there are no legitimate opportunities also, even, enabled by community and technology that also just happen to be massively capital-intensive?

Maybe we are not thinking big enough. Maybe this is the problem, the difference, between the big leagues of the VC and the barcamp community. I belive that we in the community sometimes exibit a bias not to think [really] big.

Now this “think bigger” idea sees me, for one, already heading to the whiteboard. Oh, and I’m thinking hard about businesscamp…