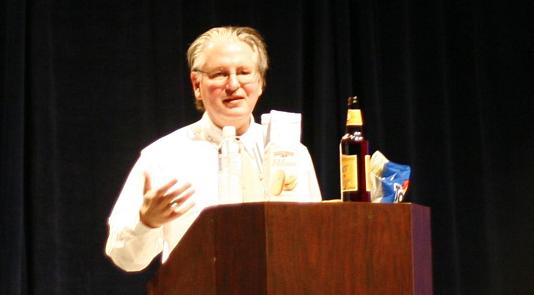 [Last of my notes from SXSW, these on the recurring theme of death of many media, but one we may particularly miss, the death of books and long form fiction]

The econoclipse has totally hastened the demise by digital soil erosion of the already shaky foundations of almost every old-media business model. And what’s crazy is how much the geeks lament this **even as they
are the very ones killing them*. It’s like OH WOE to old media STAB STAB STAB why are you dying? STAB STAB I’m so angry with you STAB STAB STAB for not having more foresight, and for selfishly dying and stuff.

Bruce Sterling’s keynote was an absolutely spot-on Irish wake for books and fiction, complete with drinking and chips on stage.

“Look,” said Sterling, pulling out a stack of copies of his most recent novel, The Caryatids, and placing it on the lectern. “These are what we used to call books. I know that you’re sort of unused to seeing them. Let me explain to you how these devices work because I’m not sure a Web 2.0 crowd follows the structure anymore.

If there is a ray of light, the answer became more clear as to what publishers, and authors have to do to thrive. According to Bruce, and echoed by Chris Anderson and Guy Kawasaki’s conversation, it’s about being (to borrow from Hugh) a personal micro-brand not about being someone tied to just one medium “the book”.

This is generally a lot easier for authors than for publishers to get their head around. Though authors could benefit from the tools and representation to help them do that. Of course this model also works better for non-fiction, or authors who are talented at speaking or at blogging or consulting or punditry, or at being charismatic enough or having enough of a following to be paid to show up anywhere like at events, or to lend their recognition/respect/authorial-aura to other projects like Margaret Atwood might in Canada etc.

But the rub, how do you align the interests of the publisher with all of these other ways that the author will actually use to feed themselves?

It’s also clear this whole transition won’t work well for a lot of writers. “Writing+charisma” is a whole other bag of tricks than just being a “writer”. In the worst case, this would be like the transition from silent film to talkies. Talkies wiped out all but a handful of the previous stars. Movie stars still existed (if fact more of them) but for the most part they were stars at a different bag of tricks.

There’s another problem, how micro can your brand be to make a living. The very literary writers who may create works only loved or admired by much smaller peer group, or those writers who are good/great but only so long as you don’t let them be seen out of the house.

Of course we as a society could just fund some of these dead media directly. Thank goodness for charity and government grants (and the CBC).

We do it already, in all sectors of society. If there’s no easy way to charge people for incremental usage of some “public good” like streetlights or paved sidewalks but everyone somewhat agrees that it would nonetheless be nice to have these things in society, then you fund it with tax dollars.

The implication here, for literature, maybe for journalism, is that it we rethink it as “high art” as in those forms of media that no one actually expects to be an economical sort of industry or otherwise supported by the market. like ballet. Maybe we are in this world already?

What does that make General Motors then? are we now considering the making of GM cars a nationally protected art form?

link: Future May Be Brighter, but It’s Apocalypse Now

link: Bruce Sterling’s SXSW keynote partial transcript (It seems, sadly, there is no audio version or full transcript on any of the internet)