A friend asked me today for a two line bio of what’s been keeping me so busy these days. And the most accurate description in very general terms I came up with was this. Stopping to think about it, I thought it sounded pretty good. I’d hire me.

Thomas Purves is a Toronto based blogger, technologist and innovator. By day, Thomas helps global major brands plan for their digital futures and navigate the as-yet murky waters of mobile commerce.

Of course, by early morning and night, my other nearly full time job consists of hurling Frisbees for a particularly indefatigable furry four legged dingo.

If you’d like your future told, or like to toss a disc sometime, drop me a line.

Every new media retrieves an archetype of a dead one. With the fuss over social presence at the moment, I recalled to how I first tried to achieve twitter. Twitter for me retrieves my very first blog which was nothing more than a log of msn messenger handles. And one point, there was even a semi-functional rss feed of this thanks to Michael Aird. Little personal moments at 80 characters or less (Twitter is generous by comparison).

A life blogged in msn handles, a year ago today

March 27 toronto,
t: anyone else want to meet me for drinks in tokyo next weekend?

March 26 toronto,
t: being wierd is not enough

March 25 toronto,
t: lips I could spend a day with

March 16, toronto,
t: she had a mind that would not abide double negatives

March 12, toronto,
t: just me, a pizza and a lonely heart tonight.

March 11, toronto,
t: damn you should see the madness on queen st today

March 10, toronto,
t: hey, anyone want to drive with me to Austin next week? You know for fun. (and SXSW)

March 8, toronto,
t: i could weep for how much last.fm is exactly like the music app I always wanted (to build)

March 5, toronto,
t: 4th explanation for the lack of women in science — they found better jobs

March 2, 2006, Toronto,
t:Bush on CO2, can’t know exactly what targets r sustainable so “issue not worth discussing” what planet are these guys from?

Feb 28, 2006, feeling homeless,
t: and not one part, of your skyscraper heart, can tell which one is for real

Feb 27, 2006, toronto,
t: he had an intermittent genius that came and went like a bad cell phone connection

Feb 16, 2006, toronto,
t: “Let chnia sleep, for when she awakes, she will shake the world” Napoleon Bonaparte

Feb 3, 2006, Geneva,
t:”europe has been more united by Easyjet than by the european union” Thomas Mygdal, lift06

Feb 2, 2006, Geneva,
t:bruce sterling: blogjects, every-ware, the infocloud, data shadows, internet of things, spimes and the wands to control them

Thanks to some friendly suggestion on our behalf, Jevon and I have been offered a spot on the roster at the Under the Radar Conference on the 23rd of March [upcoming.org]. We’ll be showing off the Firestoker project as it currently stands in development (and it’s starting to develop nicely). Secondly, if we can finagle ourselves an invite again, I’m also hoping we’ll make it to the STIRR mixer on the 21st [upcoming]

So I’ll be in the bay area March 21st to 25th, if you are, or will be, down there during that time and would like to meetup, let me know!

UPDATE: Oops! forgot I need to be back on the east coast on the 24th. (thank you Orbitz/AirCanada/United for 24hr ticket cancellation option). I’ll be in the bay area March 21st to the 23rd and a (shall for now be kept secret) East Coast location the 24th and 25th of March. 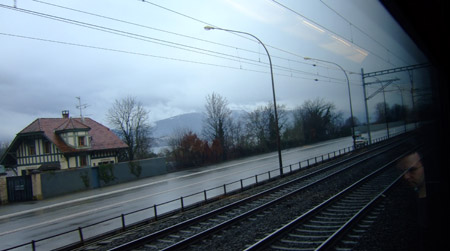 On a train again. To Lausanne with no ticket. Mountains on one side and lake Geneva on the other and in the middle my exploded mind. The fare collector is on her way down the isle, how do I explain to her there was time only to only one of buy a ticket or catch the train. Swiss timing it wouldn’t be late. I caught the train.

Some of you have been following lift on the back channel. It’s hard to explain the feeling right now, now that it’s over. The feeling lke 500 of us, our minds and passions for the world, tech, newmediums, digital-social ecologies and commerce and change hurled around the superconducting track a smashed into a shower of leptons, hadrons

It’s going to take a while to even parse all the data, the inspiration from this conference.

The ends of these conferences always leave me waffling a little. The convergence of intelligence, passion and curiosity suddenly disappears from your immediate environment, and it is a little like being dropped off on a windblown street corner of a snowy Canada and pondering what next steps to take.

And yes, it turns out you can buy tickets on the train.

And the party seems is not done yet. As Lifters in 1s and 4s and 8s spontaneously descend on Lausanne. [great video hennriette!]

Thank’s Stephanie for your awesome Lausanne hostatiousness! the spirit continues.

but most of all. thank you Laurent for LIFT07.