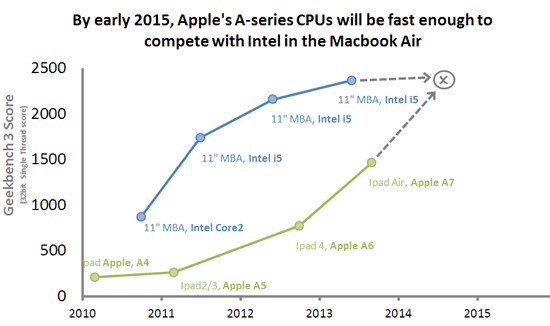 It’s been several years since I blogged regularly. Belatedly, here I am cleaning out the dusty attic of this wordpress domain, and I stumble upon this gem in anciently saved drafts. “Apple CPUs should be fast enough to start replacing Intel by 2015”. Even back then it was clear apple silicon was rapidly getting faster, faster than intel chips were getting faster. Apple also seemed to be laying in all the foundations: moving to 64bits to support more memory than any of their mobile devices needed, porting their office suite to iPads and making it free. Starting with relatively low-bar of macbook air, it seemed like only a matter of time before apple rolled over their laptop and later desktop product lines from the bottom up.

Directionally correct, but charmingly naive by half a decade. Goes to show, the future is often more inevitable than we give it credit, just don’t hold it to a strict schedule.