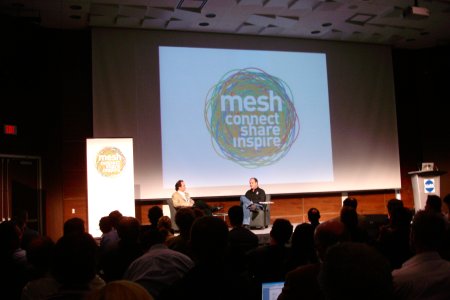 At a conference it not about the speakers so much as the conversations. some good moments today…

Talking to Nick Moraitis today of takingitglobal.org about the “future” of local media/newspapers. I made a point about an increasing number of people not being from anywhere specifically local anymore. Nick (of australia, usa, uk, canada etc.) agreed and commented on the irony of how he doesn’t care at all about the local sections of the toronto star and yet still reads the online newsletter of his old high school. This led me to say what we don’t need so much any more is geographically local media so much as autobiographically local media. So anyway yes, this suddenly is the title of the new book (or is it business plan?) than Nick and I are writing. what do you think?

David Crow‘s wiki panel was a wonderful example of wiki-style colaboration in action. With a lot of smart people in the audience both asking good questions and weighing in on the answers.

Finally towards the end of the evening I was enjoying a good debate with myself and Jian Ghomeshi vs Tara Hunt (of horsepigcow fame) on the future of the content industry. We all agreed that (the rise of the indie labels in music being the example) that the internet has done a wonderful job in terms of flattening the curve and enabling more good content to become viable in spite of the historic best efforts of the major labels to constrain distribution to the wasteland of established radio formats and top40. Where we differed though was on the prospects of “the big guys” in the future. Taking an (i’d argue somewhat endist) cue from Hugh that those organizations that don’t “get” it in terms of social media are doomed to extinction. Jian wasn’t so sure, and I agreed. There will be new winners emerging for sure, but lets not write off the powers of established scope/scale economies, real world distribution, brand recognition and installed base to soon. I for one worry that the battle for the future of content is still touch and go. yes there are encouraging signs lately, but lets us not also forget that Vista is on it’s way with signed drivers and that xbox360 (and not to mention PS3) are on their way with powerful media aggregation built in and even more powerful DRM all locked down to a (very) closed system. Nor has WIPO gone away yet or the trade pressure from the U.S. We’re not out of the woods yet.

Anyway this should all make for some more interesting discussions tomorrow. meanwhile goodnight…