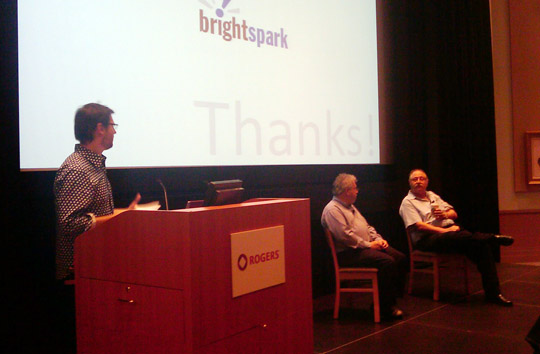 The Jewish mother is the secret weapon of the Isreal tech success. It’s a state of mind. All of your life you aspire to prove to your mother that you are not an idiot. (This is a lost cause). But this is a matter of culture that create success. In particular jewish culture it is panic and guilt. And if one morning you wake up and you don’t feel guilt then you panic. This is what Yossi Vardi, the great Israeli entrepreneur and generally hilarious guy is telling us, somewhere amidst the first 37 minutes or so of his answer to David Crow’s question, the first introductory question of the night I might add of “how would Toronto recreate Israel’s vibrant startup scene”.

It’s like the piano and the pianist. You need infrastructure the finance, the support, the institutions but you need the pianist drive and aspirations and community. You need attitude towards failure that means failure is not shameful. The biggest barrier to innovation is the fear to look stupid.

You have to have an ecosystem. It’s not just one component, it’s the education, the government, the media, the community.

I don’t read business plans, I consider it a personal offense to give me one. Business plans are a sub-genre of science fiction. The common thing with business plans and sausages, is that the only people who are eating them don’t know how they are made.

I don’t do diligence, I like to fund the proof on concept. If after half a year the kid is still doing what he said he would do six months ago then he’s doing it wrong. Talented, nimble, nice character is what you look for in people

—————
A word from our sponsor. Rogers Venture Group formed in January, already they have funded a few mobile startups. Ready to start all the way a seed stage, as well as provide connections, resources and access of Rogers. Always looking for powerful ideas and amazing talent. Founded among others, Thoora presenters and techcrunch finalists. [Rogers Ventures is pretty cool, you may want to get in touch]

Agilebuddy “Simplyfying Scrum Online”
Part of brightspark companies. brings soc media to dev teams. Apparently 75% of companies still using outdated techonologies (that means excel) for managing projects. The problem with this demo is that it is not a demo. We are supposed to be compassionate to the demoers but there used to be rule about powerpoint. Some screenshots now, it’s pretty much facebook for your project with a wall and comments per item etc.

Assetize
First of three startups in Toronto to emerge from extreme ventures incubation program. Assetize lets social media users monetize their accounts. The idea is to connect brands with micro bloggers on for example twitter. They “know” what users are talking about and connect them to advertisers. Slick interface for buying adds or setting up. Waiting for the wicked problem of economics in social media. No one micro-blogger has enough traffic to make any money at this, let alone spam their friends for pennies. the examples are say semi-pro tweeters like NBA news or women’s fashion twitter account. This isn’t for you personal twitter. Yossi’s question, what is the reaction of the users. Answer oh they love it. honest.

iStopOver
another brightspark venture. It’s like post-money night at dc. istopover is ebay for home owners. This is another powerpoint demo arg. Does someone need to borrow my rocket stick so they can do a proper demo? They also provide a secure escrow service for the rental so it’s lower risk for the renters. It’s hip to be frugal and the world is more social now so these trends apparently fit in. By god man where is the demo? Question about safety: a lot safer than craigslist because you can get to know each other on facebook first.

Locationary
Trying to solve the web problem of local information. The place database created by you. Google search fails frequently at common local searches this is true. So he wants to create augmented reality and so forth. Marketers and internet companies pay 20billion/yr for local databases. Data is free to use, free to add and crowdsourced model. so all this is fine but how does it get populated. It’s a gold rush model, first one to populate gets a piece of the revenue stream.

Superheroes Alliance
Our demoer today was born in 1986. Facebook made him verify his date of birth to login. It’s a social RPG, in facebook where you can create little superheroes in an image based game. And you can fight with/against friends and build up alliances (which helps with vitality). You can level up, you can hire sidekicks, you can buy vehicles. He just hired a ninja for 150k. Mostly played by males mostly 30 and up. Ok I think I would play this as a casual game. But not for 12hrs a day. Monetized by selling a virtual currency called science points and special items. Cash-flow positive, some users have spent triple digits. Next up is a celebrity game for women, where you can have showdowns with your girlfriends. Says Yossi “real world is the escape for people who cannot play online games”

Thoora
Gets a big cheer for “so we’re not going to show a powerpoint and just go straight into the demo”. These kids are good. Thoora aggregates the blogosphere, the twittersphere and news stories to aggregate everything that everyone is talking about right now. This is pretty cool. Indexing 80M blogs and 4.5k news sources. Has ways of viewing news, by blogger view and by discussion. They also filterout say 80 different news stories that are actually just the same AP story. So this is technocrati mixed with google news, mixed with twitter trending topics all in one big “will it blend” moment. The money quote: “Aggregating is not that hard, all you gotta do is: sit down, think, and do a lot of crazy science”.

That, my friends, is how you strike oil.