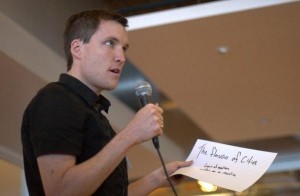 The nice folks at refreshevents.ca have asked me to take part in their speaker series at their April event (20th of April at the CSI in Toronto). Here’s what I’ll be talking about:

Tom Purves, “How ‘Augmented Reality’ and the Mobile Web Changes Everything”

Mobile broadband access and ever-smarter phones are shaking the internet out its lofty cloud and bringing the web into the real world. As a result, the old “real world”, and many old ideas and many old business models will be running out of places to hide from the pervasive influence of the net.

Meanwhile, each of our smart phones are in many ways even better than the old clunky tools we used to use to surf the net. Our mobile devices are not only connected but, also bristling with sensors like radios, cameras, microphones, GPS etc. that can directly perceive and interact with the world around you. We’re reaching a point where it’s theoretically possible to point that device at almost anything: a landmark, a product on a store shelf, your friends or a crowd of people; and draw from the cloud and your social graph as much, or perhaps more, relevant information than you ever wanted to know. Oh, and the cloud will be watching you and whatever’s around you as well.

In the new augmented reality, the web surfs you.

The goal of this talk will be to provide you with a fast paced overview of what this new “augmented” reality will mean for how we socialize, for how we sell and market physical products, for architecture, for media and entertainment, for public policy, crime, privacy and, as well, few early signals for what might be the new killer apps.

Tickets went up this morning, it’s a free event, but the venue is small so as of this moment there’s only a handful left. If you would like to but can’t make, I will also be slidesharing the slides afterwards.

UPDATE: Is now sold out