Controversy stirs in democamp land this week as demos fall flat, buxom beauties bring out bad behavior, David Crow issues a public apology on behalf of the community and a team of sex-obsessed rails developers demo what they’ve been up to late in to the night. All with pictures after the jump…

A Treatise In defense of DemoCamp.

Okay so first off see this “An Open Apology” and the original post and lively discussion here “An Unrepresentative DemoCamp” Greg Wilson has posted a thoughtful criticism of this week’s democamp taking it to task for both the uneven quality of the demos and, more worryingly, not being inclusive i.e. towards women.

I would admit a couple of the demos were a little dry. However, I’d argue that A) All the better that the other two were a little bit racier? B) Don’t you get the sneaking feeling sometimes that some of those outdated looking, crushingly dull softwares probably, in actual fact, have probably driven wildly more revenue than half the web2.0 wonder-apps all put together?

Aside from the lamentable (and complicated) issue of the dearth of female participation in the tech community (and tech industry at large), the issue was triggered by the (what seemed to be arbitrary) use of a notably, um, buxom image in the context of editing a perfume advertisement. 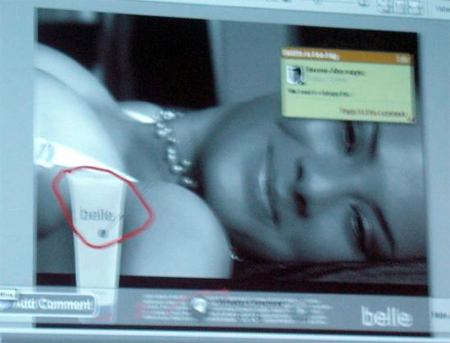 One of the guys standing behind my table made a couple of locker room comments about her breasts while the image was on screen, and another couple of guys near him laughed. They probably didn’t notice the looks on the faces of the women at my table, but I did. As the one who had invited those three women to attend, I felt embarrassed, and ashamed, and more than a little bit angry.

It’s hard to comment on this directly as I didn’t hear the comment or see the reactions firsthand. However, I will say that as I was standing with a small group of women in another part of the room. And though I can’t even remember what she said, it was definitely one of my female friends who made the first quip. You couldn’t really ignore that picture. Which is a most too bad, because I will say this:

I was blown away by the conceptshare demo. Concept share is a way to collaborate on visual documents. It’s spectacular in its execution. Having spent the last two weeks playing endless e-mail tag with a designer and team members trying to finalize our firestoker branding, I want this software and I want it yesterday.

The conceptshare demo alone was worth the price of admission for me and I hope that the controversy doesn’t overshadow the high value of this demo.

And then the Pursudo guys started their presentation with, “The purpose of our software is get someone in this room laid,” or something very similar.

Now you might think asking a group of computer-savvy young men to design a social and romantic dating site is a bit like asking a porpoise to design a running shoe, but you have to give them heart for trying.

There was controversy and perceived unease around unspace declaring their software’s main purpose was to “get us laid”. Myself I took this comment in the vein of self-deprecatory humor, as in the vein of “yes Virginia, even computer programmers (like garbagemen) are sometimes allowed to think about these things too”. I would say kudos to them for standing up in front of an audience to do something little bit risky and to do it with humor. If anything, I read my female colleagues’ reaction to be rather more bemusement than discomfort.

And can we really expect democamp to completely ignore the relationship between the Internet and sex? I mean, have you seen the internet?

We also do get a fair number of “things I whipped up with rails in my pajamas last night” type demos [ed- and how did rails get in your pajamas?] I don’t mind be so much. As a form of social rapid prototyping they can be interesting, and I though their application was dead simple, I thought the unspace crew brought some novel ideas to the online dating idea and I am curious to see how their experiment turns out.

Another thing is that, as far as the local industry is concerned, DemoCamp is as much about educating the audience as it is the presenters. If your demo kills, it’s a great way to start some buzz and springboard yourself to (slightly) larger fame. If you crash and burn, it’s okay too, this was an opportunity to get some feedback and practice your pitch in front of an audience that won’t judge you, ahem, too harshly.

That said, tips for pulling off a great demo:

That also said, I’m on the hook for presenting next month. I’m nervous!