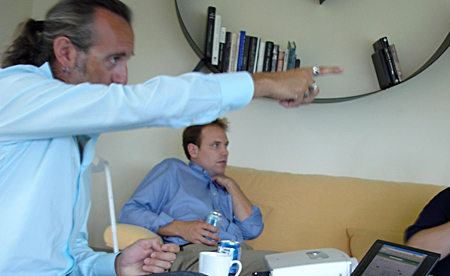 So Microsoft is launching all this new “Windows Live” stuff. All this new all new stuff. new! new! beta! beta! new! beta! oh my. The list is pages long. Awakening from a little power nap having dozed, oops, a little (just a year or 3) longer than intended, the great vole of software is up with a start. oh my! the consumer internet has left us down the tracks. quick! somebody do everything!

“Lord Ronald said nothing; he flung himself from the room, flung himself upon his horse and rode madly off in all directions.” – the inimitable Stephen Leacock

Q: Anything really knock-your-socks-off-innovative thus far? can’t say anything jumped out at me.

Q: Is it bad we have more competition for all manner of Web services? of course not, as consumer one can’t complain about more options. Interoperability (open api’s, rss, import, export, standards etc.) would be greatly appreciated though. (Microsoft will you ever listen?)

Q: Is the brand from name to execution a little ambitious (to put it charitably) as to what they’re trying to wrap their arms around all in one bite (to muddle metaphors)?
Hmm, No doubt. Many of the apps do certainly have a true beta feel about them from teething performance issues to certain UI oddities. But then, before Google hijacked the idea, this is what Beta’s are for.

Q: Not worse than MSN? oh god yes, and for now cleaner and less ad strewn – at least until ms channel partners (sympatico in canada) get their paws on this stuff.

fact of the day: between hotmail and messenger services, MS has 300 Million users.